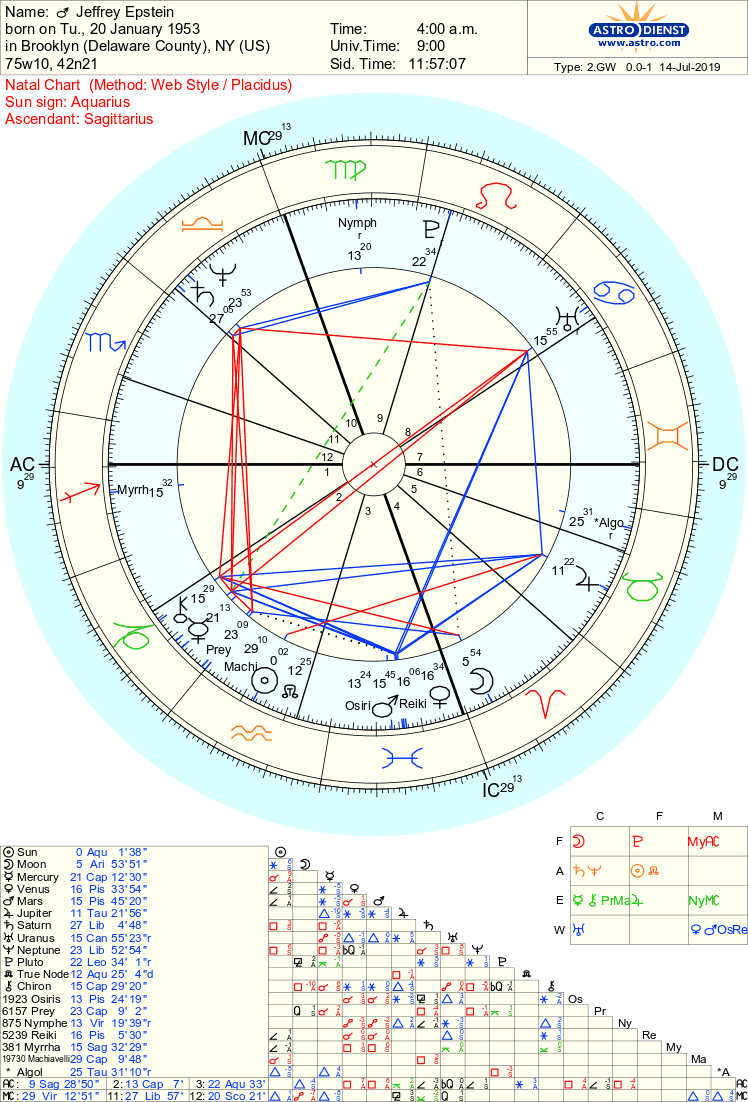 When I do a natal chart, I use my list of 300 or so asteroids. Most asteroids are not highlighted in any given natal chart. Only certain asteroids are pivotal and these represent the life themes of the native. So, if you are trying to use asteroids in your own chart, know that only selected asteroids will be important for you. You know these by the very close aspects to important parts of your chart like the Ascendant, Sun, Moon etc.

Back to Jeffrey. Jeffrey is someone whom one can not understand without asteroids. Of course, we do not have his actual birth time, so cannot know the Ascendant, IC, Descendant and MC. We cannot know the houses. However, we can know the majority of the chart information without the time of birth and I do not see indications that he is “weirdo” in the natal chart simply with planets.

However, when we come to asteroids, you can “knock me over with a feather”. I think this is one of the worst asteroid profiles I have ever seen.In this article, we will explore 6 asteroids—-Sphinx, Myrrha, Machiavelli, Prey, Reiki, Osiris.

The one that was most fascinating to me was Sphinx. Sphinx is hidden secrets, particularly evil things that are kept secret. *GULP*. The Sphinx asteroid is in EXACT conjunction to Jeffrey’s Sun. They are both at zero degrees Aquarius. The Zero degree is the most powerful degree, just as the 29th degree is the weakest degree. Hence, anything at Zero degrees is much stronger energetically.

The next asteroid that interested me the was Prey, which is conjunct his Mercury at 2 degrees. A person with a prominent prey may go after prey or be the prey. I don’t know. I have not done enough charts to definitively say. Let us just say that in the mind of Jeffrey Epstein, he is dealing with the subject of “prey”.

Next in order of interest to me is Machiavelli. I have seen this asteroid in many charts. It is in the charts of people who can use cool logic and the means necessary to get done that which they want. I cannot say this asteroid is “bad”. It could be used by an ethical businessman to get what he wants without being immoral, I think. Once again, one has to do many, many charts and talk to many clients to ascertain the fine nuances of the asteroids. My intuitive feeling is that Machiavelli may be someone who is very savvy and very street smart, but not criminally so. However, the person could be an immoral criminal who takes what he wants and does not care about the effects on others.

Jeffrey has Machavelli conjunct his Sun at one degree. Alex Acosata said Jeffrey Epstein was a CIA operative. That makes sense to me. Epstein blackmailed people.Many, many people in government are blackmailed. Epstein would have to be a cool operator to be in this kind of operation, for sure. That would be one manifestation of the asteroid Machiavelli.

Osiris was perpetually “getting into trouble”. His loyal wife, Isis, pulled him out of many a jam. In fact, he was, even, cut up in pieces and she put him back together a la Humpty Dumpty. Keep this in mind for the picture of Osiris. Osiris conjuncts Jeffrey’s Mars at 2 degrees. Hence, we can say that Jeffrey gets himself into terrible, terrible jams of almost a surreal nature.

The next asteroid was interesting to me because Jeffrey lured women on the pretext of wanting a massage. Reiki is an asteroid that deals with the body energies. It is used in body work as a form of massage. People who are interested in the body energies, often, have Reiki in a prominent place in the chart. You can, often, see it in the charts of massage therapists.

The last asteroid is Myrrha. I think this is a fascinating asteroid because it deals with something dark, sinister and taboo, which is really that what makes us fascinated with Jeffrey Epstein. Myrrha has to do with things that go against nature, such as child abuse, sex with animals and other things of this nature which you can imagine.

I am wondering if Myrrha is conjunct the Ascendant of Jeffrey Epstein. In my guess of his Ascendant sign, his Ascendant is close to this asteroid and it would fit well if it were conjunct his Ascendant. This is just food for thought. You can find all the asteroid numbers on my article “The Asteroids I Use”. If, for some reason, some of them are not there and it is not updated, then you can find the numbers on Astro.com.

12 thoughts on “More Asteroids in the Natal Chart of Jeffrey Epstein( Sphinx,Machiavelli,Myrrha,Prey,Reiki,Osiris)”