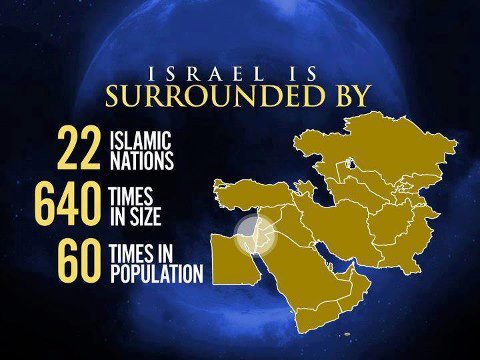 Prior to World War Two, the land which is now Israel and Jordan was owned by England. There were both Arabs and Jews there, but it was mainly a nomadic wasteland. After the Holocaust ( and Chaim Weitzman giving England an invaluable scientific discovery) England gave a slice to land to the “peoples” there, the Arabs and the Jews. There were two pieces and the Arabs chose the biggest one first. The Jews took the other, smaller one. That is the beginning of Israel as a state. One slice of land was called Israel. The other was called JORDAN. Immediately, Israel’s neighbors attacked her, but that is not germane to this article.

Arabs, the sons of Ishmael, can not get along with each other. Genesis says that the sons of Ishmael will be like wild asses, every man against his brother. Look around. This needs little comment, except for the fact of what is coming next with the “invention” of the Palestinian people. The Arabs in Jordan started fighting with each other, as is the case with all the various factions. Some Arabs from Jordan kicked out others. The kicked out Arabs were called Palestinians. Their homeland is Jordan.

In the meantime, the Jews made Israel blossom as a rose. The Bible says that Israel will only blossom in the hands of the Jews. That has been the case. You can see if you look around. Israel supplies the Middle East with fresh produce. Israel is second only to Holland in fresh flower production.

At any rate, there is a deep animosity between the Arabs and Jews from the days of Isaac and Ishmael. This would take too long to explain here, other than to say the the animosity had it’s roots in Ishmael’s birth. However, to go back to the founding of Israel and Jordan, that is the history of how they were show it was founded.

The Palestinians were kicked out of Jordan and used by the Arab states to besmirch Israel. The events of Bible Prophecy cannot be stopped. There are terrible times coming. Each man will be called upon to make a choice on where he stands in this ancient conflict. Each nation will have to take a stand. All Bible Prophecy comes down to Israel, the apple of God’s eye. All of history will converge in the last battle of Armeggedon. I saw that huge valley when I was in Israel. All nations will turn against Israel BUT every individual has a choice. Choose well.

2 thoughts on “How Did the Israeli/Palestinian Conflict Come About?”