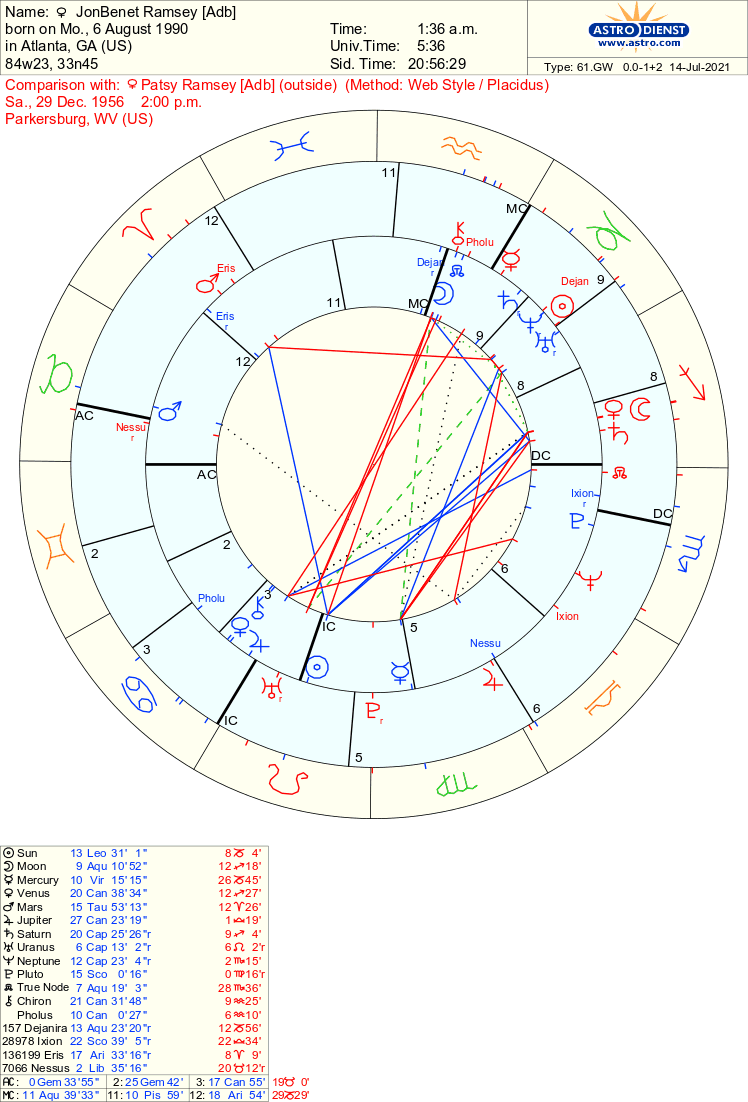 I am interested in two crime cases—Jon Benet Ramsey and Madeline McCann. The parents had everything life could offer and it all turned bad. How and why? Astrology answers these questions. I think you will be as interested as I am.

!. Jon Benet had Dejanira oppose the Sun. This shows abuse from the father, which is what I think happened. It was an intermittent abuse, most likely. The opposition shows the back and forth nature of an aspect. I have read many books on this crime. The theory that makes the most sense is that Patsy killed her by accident. However, John Ramsey was her sexual abuser.

2.Jon Benet has the horrid Dejanira conjunct the MC. This aspect shows that her abuse will be SEEN by the world and it was.

4.Jon Benet has Sun conjunct IC. She was the Sun, the shining element in her home, the super princess, the beauty queen.

5.Patsy has the dreaded Nessus conjunct the Ascendant. People get angry at me for my stance on Nessus. I will never demure on my astrological opinions for the sake of public approval. I may change my mind and I have about Nessus. I think Nessus can give strength. I think it can allow a person to stand up for themselves and not be abused by others. HOWEVER, when it is conjunct the Ascendant, most people will be abusive.

5. In Patsy’s case, she has something I have never seen. She has Dejanira conjunct the Sun as well as Nessus conjunct the Ascendant. She is both a victim and an abuser. Her father abused her, as well.

6. Patsy’s relationship with her mother was not good. So, she had no one. If one sees Patsy’s mother and sisters, the “creep” factor is off the charts. There seems to be a purely evil sense to them. Patsy does not have this, in my opinion, but her sister and mother do. So, one can only imagine the awful life which Patsy led as a child.

7.Patsy has Moon conjunct Venus which does show love from her mother. However, Saturn conjuncts this, so we have a mother who was very, very critical of her. Her mother was critical of Patsy’s emotions and her looks.

8. The hardest part of all this is the relationship between Patsy and Jon Benet. When I tell you about some of these aspects, you will gasp.

9. Jon Benet’s Uranus conjuncts Patsy’s Sun/Dejanira. This aspect is very explosive. It shows that Jon Benet caused upheaval in Patsy. I think Jon Benet was a tomboy. She did not want to be a beauty queen. She wanted to be a little girl. Patsy wanted Jon Benet to be a little princess. This aspect shows me that there was a lot of fighting within this relationship.
Also, Patsy’s sense of being a victim herself was ignited by Jon Benet.

10. This aspect is very, very painful. Patsy’s Chiron conjunct the Moon and North Node of Jon Benet.This aspect is in the 10th house—the house that is seen by the world.

11. The Nessus of Jon Benet conjuncts the Jupiter of Patsy. In these cases, the Jupiter makes the Nessus worse, so Jon Benet wanted to abuse Patsy and may have done so in the way she could, as a child.

15 thoughts on “Astrological Insights in the Jon Benet Ramsey Case”