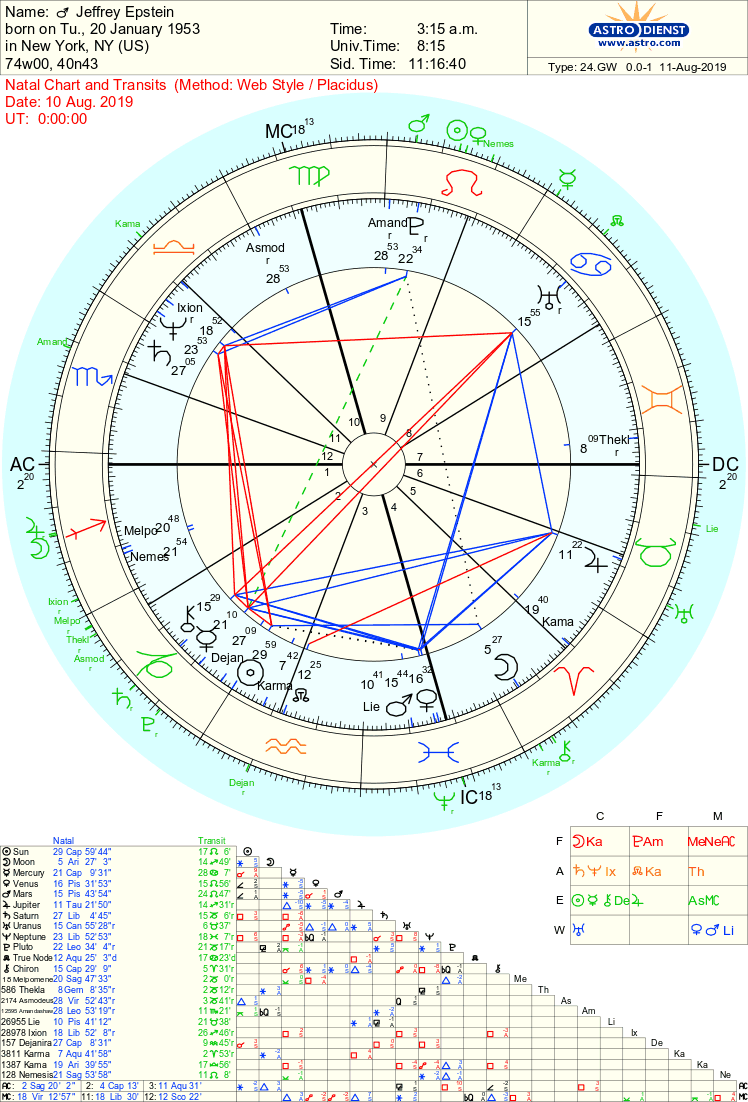 I find this to be sad. Maybe I shouldn’t. I want Hilary Clinton to pay. I want Obama to pay but I feel sad about him. I don’t know why. Let’s look at his chart on the day of his death with transits. I did the chart for Joan Rivers for her day of death with transits. I was aghast because it indicated foul play. I was not surprised, in a way, because she spoke out against Michelle Obama, but I was deeply saddened. She was one of my role models. It is very scary that George Orwell’s book “1984” is coming into play. The younger generation is not taught these kind of classic things. Hence, they fall for concepts like socialism. Socialism cannot work. It is incompatible with human nature *SIGH*

Well, onto our current subject. In a swift perusal of the chart, I am “blown away”. The asteroids are so intense and so correct. If you read my previous article, you can see what a “ten car pile up” of asteroids Jeffrey Epstein hasd on his Sun. I have never seen a worse Sun/Asteroid profile in all my years of doing chart. Jeffrey had a really bad father. I wrote an article on his parents. He had a really bad mother, too. I am not excusing his choices, but he could not think clearly.

When I do the natal chart, I do not usually do asteroid to asteroid conjunctions. The reason is that there are so many of them. It takes me four days to do a natal chart as it is. However, everything in the chart is significant. I see something very significant in the natal chart of Epstein that I missed. He has the asteroid Melpomeme conjunct Nemesis. Melpomeme is tragedy and Nemesis is hidden enemy. Hence, I think we can assume that he met his end at the hands of an enemy. Most people think he was killed by an enemy, not committed suicide.

Since we do not know his birth time, his Moon could be six degrees in either direction but many people, including me, think he is a Sagittarius Ascendant and so, transit Chiron would conjunct his natal Moon. Chiron is pure pain. I don’t know what is much more painful than to be killed in jail.

Transit North Node is conjunct his natal Uranus, which I think is in the 8th house, the house of sex and death. Uranus is sudden stops and starts. He did have a sudden death in jail.

Transit Uranus is approaching natal Jupiter. Jupiter is, often, a player in death. Jupiter expands and when one dies, one becomes amorphous i.e expands into spirit. Uranus breaks apart the structure of that which it touches. In this case, it would be the physical body.

In the natal chart, the asteroid Ixion opposes the asteroid KArma. Ixion represents someone who has no respect for rules. Karma may have gotten it’s way. He paid the ultimate price for his crimes. I do not believe in karma in terms of past lives. I do believe in karma in terms of this life. What you do to others always comes back to you–in this life or the next. So, be careful when you treat others badly!

With the transit chart, one really does need the correct birth time. I have made a stab at looking at his transit chart for the day of his death. I feel it was an incomplete look and I apologize for that, but I offer it to you in the spirit of hoping you will find some value in it.