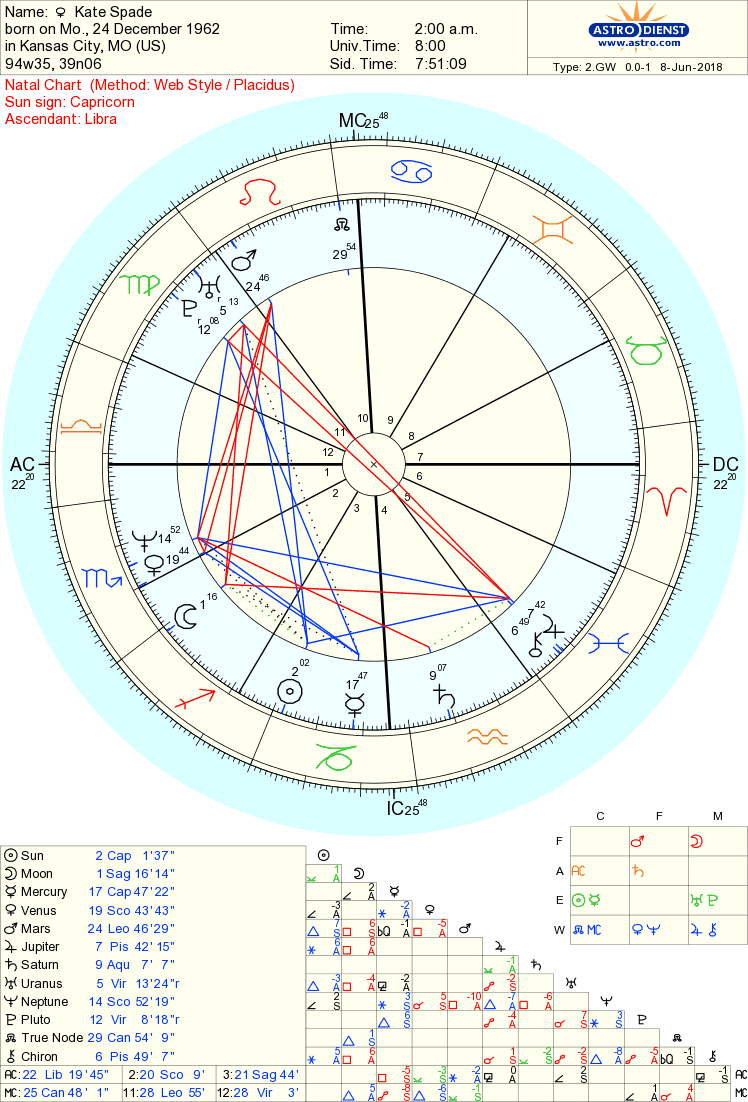 When I heard that someone who “had it all” committed suicide, I wanted to know why? We all do. We do not know her time of birth, so I chose a Libra Ascendant because it made the most sense to me from her appearance and her love of design. Also, with the Libra Ascendant, her North Node(purpose) is conjunct her MC(career). However, we cannot know the actual placement of houses. The Moon may vary up to six inches in either direction, as well. Let’s see if we can derive some insights. I am being lazy( my Libra Ascendant) and not looking at asteroids. I use over 300 asteroids and need to make many, many charts in order to see the all the asteroids. I may do this with her char, at a later time, if people really would like to study the asteroids. However, for now, we will study her planets.

Kate Spade—-Trying To Understand Her

The Venus conjunct Neptune strikes me. This aspect is the native who cannot see clearly when in love. This aspect does play out in a similar way in all the charts I have studied. The person truly cannot see clearly to discern the true nature of the person she loves. We have heard that Kate and her husband were having marital problems. Her suicide note showed the depth of rancor she had to her husband. I will say that someone with this aspect may not have chose her husband well in the first place. I say “may” because we would need to see the synastry to really make such a bold statement and stand by it.

As I do the chart, I realize that I do need to insert some asteroids. Her Moon, likely, has some painful asteroids in aspect to it. I bet her Ascendant does, as well, and likely the other angles. I will do a second article with some asteroids. Her Moon does square Chiron at 5 degrees. However, we need to remember that the Moon may not be exact, as I mentioned above. Moon square Chiron is VERY painful. It is a very difficult and painful relationship with the mother that does not seem able to be resolved, no matter how hard both people try.

Her Sun seems to have positive aspects. This tells me that her relationship with her father was fairly good. She, herself, has the aspect of brilliance–Sun trine Uranus. Daryl Hall has this, too. I notice this aspect because I admire it so much. It is a genius kind of innovative intelligence, not a “parrot the teacher” kind of intelligence.

She has Pluto Retrograde, which tells us she is a person who, likely, does not feel comfortable with her personal power.

She has Uranus Retrograde, which tells us that she is not really comfortable being “weird” or different than the societal norms.

Mercury Trine Pluto is lovely. She can speak her mind.

So far, what I see that is the most explosive and problematic is the Chiron/Jupiter conjunction oppose Uranus. One does not want Jupiter in conjunction with any “bad asteroids or planet, in this case”. Jupiter enlarges that which it touches. If it is a “good asteroid” or a planet such as the Moon or Venus, we have great benefits. Jupiter conjunct Venus is a person who can show “big love”. However, if Jupiter conjuncts Chiron, the person has “big pain.

Uranus makes unstable that which it touches. I have not really studied the transits in her chart for the day she died. I do not pay that much attention to transits because we all have good and bad ones almost all of the time. Most of the time, the transits do not result in terrible things like suicide, so I don’t like to draw conclusions from transits. However, if anything really explosive or very painful aspects in transit touch this natal aspect, it may be the reason she felt she could not go on. I have seen the asteroid Aphophis, in transit, hit the natal Jupiter and a suicide resulted. However, the natal chart did have many markers for deep pain, such as Chiron conjunct the IC and a Mercury/Uranus opposition( electrical, racing mind)

She is low in air, which may make it hard to reach out and communicate.

I stand with the Chiron/Jupiter conjunction oppose the Uranus as the most problematic aspect I have seen so far. We don’t know houses, so we don’t know which realm of life held her pain. I will look at some asteroids tomorrow, particularly Aphophis, which is the asteroid that shakes things up very badly and creates chaos.

10 thoughts on “Kate Spade—-Trying To Understand Her”