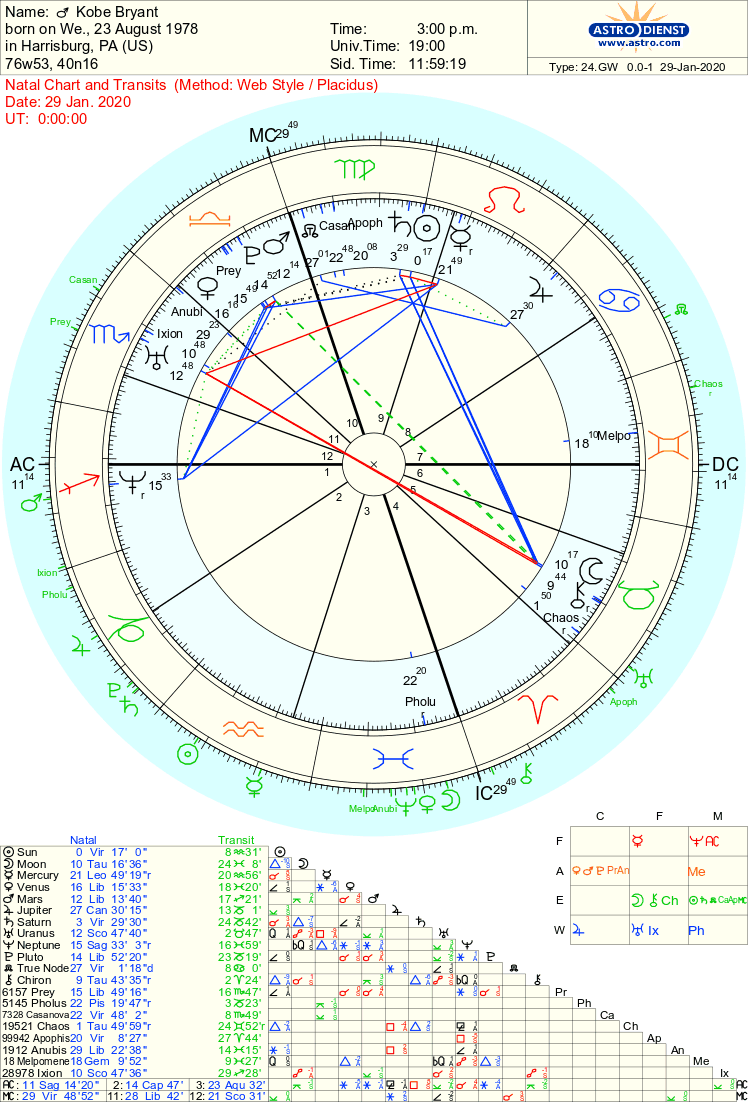 I did a chart for the death day of Joan Rivers. I was aghast that asteroids for foul play were very strong. She had just insulted the Obamas. I think it is dangerous to insult people like this, as we can see in the over fifty “suicides” of friends of Hilary Clinton. I like the word” friends”. Don’t you?

Well, things are scarily bad in our current society. Was Kobe’s death an accident or foul play. I will try to address this. At the moment, I am trying to ascertain an Ascendant. We don’t know his actual time of birth, but I like to try to approximate an Ascendant when I do a chart. A chart seems so amorphous with no time of birth. I can’t seem to sink my teeth into it.I am thinking that we could learn more from a look at his daughter’s chart, too.

He had a positive “vibe”. He exuded enthusiasm, which is classic for a Sagittarius Ascendant. This Ascendant may be the most athletic one. Princess Di was a ballet dancer. This Ascendant tends to have long legs.

After I chose this particular Ascendant, other things seemed to fit. He had Neptune conjunct the Ascendant, which gives a very beautiful face, which he had. Also, we have several planets in houses that make sense.( As most people know, the time of birth determines which planets are in which houses.)

With this time of birth, we have the very painful Moon conjunct Chiron in the house of romance. I listened to a U tube entry which described his alleged rape of a hotel worker. He settled the case for several million dollars. He said that he thought it was consensual,but admitted to choking her. She had bruises on her neck which could not be denied.

I hope people are not angry that I am speaking “ill” of the dead. I am, always, honest. Why spend your precious time here if I blow smoke up your derriere? I will never do that. Know that one fact about me. When it comes to my craft, astrology, I will, always, tell you the truth. I have Moon conjunct the MC. You will see my open heart in my career.

Also, back to my choosing of the Sagittarius Ascendant,someone of Kobe’s stature SHOULD have an occupied tenth house. With my theoretical time of birth, we have three heavy hitter planets in the tenth house.

While we are discussing Kobe, in general, he was gifted with charisma due to the Venus conjunct Mars. People on a global scale saw his charisma since this conjunction was in the tenth house. Also, Kobe has the refined Venus in Libra. To outer appearances, he was very refined and elegant.

I have added some asteroids. There are some interesting things that have come to light, as is always the case with asteroids. He has the asteroid Prey conjunct his Pluto and Venus. Prey is sandwiched between the two at a one degree orb for each.

Pluto conjunct an asteroid gives it power. This power seems to be used for good. I have Pluto conjunct Dejanira. I will fight against bullies. Dejanira is the victim asteroid, so instead of my becoming a victim, I am an activist against bullying when I see it online or in my personal life.

So, in terms of the Prey asteroid, Kobe may have defended people who were bullied. He was a coach for his daughter’s basketball team. He may have encouraged young girls in sports. Now, Prey conjunct Venus shows HE will be prey when he is in love. Venus and the Moon are yin planets–receptive planets. Hence, the native is on the receiving end of the bad action, in this case the “prey”. I hope that made sense.

Another aspect that strikes me is the Saturn conjunct the Sun. This indicates a father who was very critical of the native. In turn, the native is very critical of himself. We, also, see a very painful relationship with the mother in the one degree orb aspect between Chiron and the Moon. For Kobe, his mother and women, in general, were equated with pain. Also, his own emotions were painful to him, personally. They, likely, felt like unwanted aliens.

This is very sad. Kobe was an orphan, emotionally. If we add the aspect of violence to this, we can see how his pain may have been channeled into violence. I hope I don’t have to say that I am not condoning violence, but some of the people who comment on my articles are morons(just keepin it real),so I add this caveat.

The Chiron/Moon is in the fifth house in this chart in which I estimated birth time. I think his romantic life( affair/rape) brought a great deal of pain, so a fifth house Chiron would fit. Chiron needs to fit into the house of the most pain for any native in his birth chart.

On this theoretical chart, his NN(life purpose) conjuncts the MC, which is career and the public angle. This fits. Someone as famous as Kobe should have a NN which indicates this.

One more thing about his natal chart before I move into transits. Uranus conjunct Ixion. Ixion is lawlessness. People with a prominent Ixion, such as conjunct the Ascendant, seem to be in trouble with the law. They have a “screw it” attitude to rules.

In Kobe’s case, Ixion was conjunct Uranus, so he had erratic ups and downs with the law, which he did. Some aspects are generational, which this may be. It does not mean everyone with this aspect will have trouble with the actual law, but they move to the beat of their own drummer when it comes to rules.

Now, we are onto transits. I added some asteroids I thought were relevant. I may do another article and add more, but let’s see what we can find with these. Also, I will look at transits involving planets. First of all, we have a close conjunction of transit Mars with natal Neptune. Many people have this aspect and this transit and do not die in airplane crashes. However, IF Mars was conjunct his Ascendant, it would be very significant.

I wonder if his Ascendant was a higher degree of Sagittarius, such that Mars did conjunct it. I would not be surprised. If this were the case, the planet of war and aggression would be attacking his physical body, which could be said to be what happened.

If someone wants to do the chart over with the Ascendant at the degree of transit Mars, it would be very interesting. Since I have gone this far, I am not going to do it now, but I may at a later time.

WOW Jupiter seems to be a major factor in death. His natal Jupiter is 27 degrees Cancer. Transit Apophis, which means chaos leading to possible doom and destruction, is an exact square to his natal Jupiter.

Transit Jupiter, which seems to be a major factor in death, squares his natal Mars at a one degree orb.Squares are a locked in, immovable energy. In transit, I can see squares being fate.

His natal Melpomene, which means a huge tragedy, is an exact square to transit Venus. Venus is love. Love is blocked on this day and tragedy occurs.

Transit Moon conjuncts natal Pholus at two degrees. Pholus explodes that which it touches. It is, often, a factor in crashes. I am not sure what to make of this but I am putting it forth to get your opinions and because it seems of great importance.

This is a rather shallow look at the transits. Honestly, I do not do a lot of study into transits because I think that they do not show, usually, the DEGREE of what will happen. In other words, they do not seem to show whether you will have a car accident or cut your finger with a knife. I could be wrong. People who have more experience with transits are welcomed to give their opinions.

I know that in the case of JFK, it was almost clear to see he would be murdered. I do not do transits enough to predict things like this. I am not comfortable with predictions, in general, because I think they are more in the realm of God than in that of astrology.

I feel very comfortable with natal and synastry. I think God gave us each a blueprint and He wants us to know our earth suit. I think astrology is a science, not a dark art, for those who accuse me of not being a real Christian*sigh*

Well, on that note, I will conclude this article. I may do another one with the Sagittarius ASC at the degree of transit Mars and see what we can see from that.