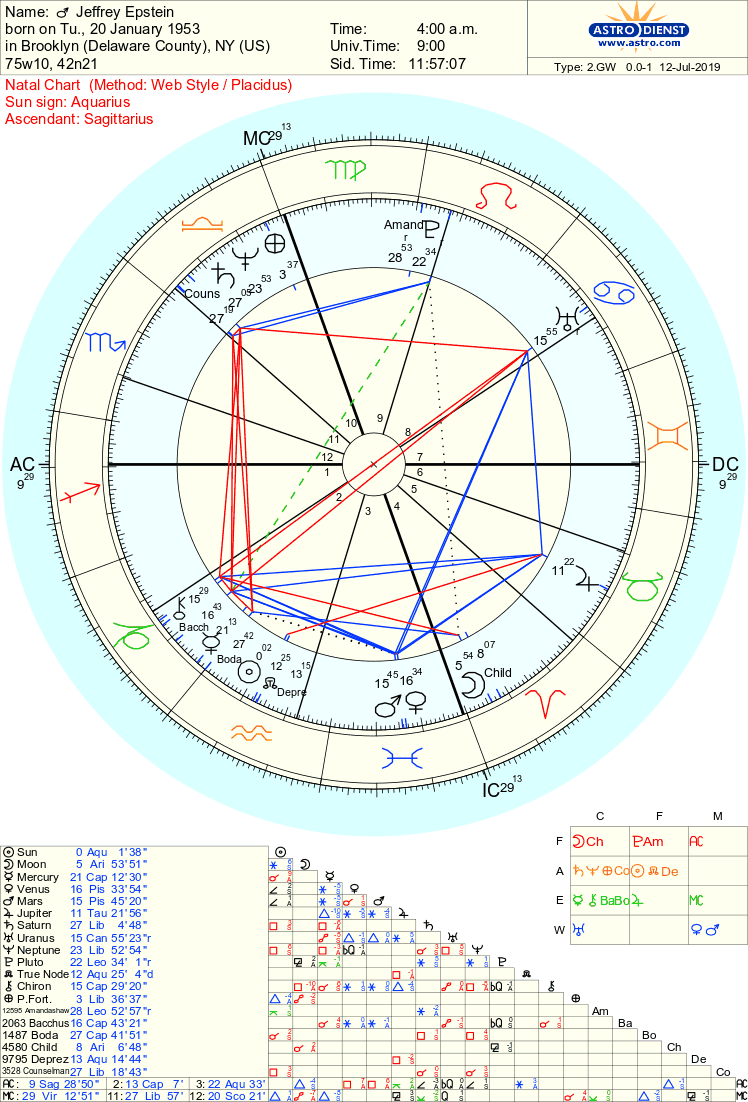 I have just found some more mind blowing asteroids in the natal chart of Jeffrey Epstein. When I do the natal charts, I allow up to a 3 degree orb for conjunctions and a 1-2 degree orb for other aspects, such as trines, squares and oppositions. However, some astrologers only allow for an exact orb, so you can see how energetically small and weak these asteroid bodies really are.

The asteroid Deprez indicates depression. I know there are skeptics out there who scoff at things like this. My answer to you is to use asteroids in your own chart and the charts of those whom you know. Prove it to yourself. That is the scientific method—AYE.

His North Node and Sun have many asteroids conjunctions which we discussed in previous articles. I will refer to some of them now to add clarity to the chart. Jeffrey feels like a victim in life(Dejanira conjunct the Sun). Jeffrey goes through like like the bomb of a Muslim terrorist. He blows up his life(Pholus conjunct the Sun) Jeffrey has chaos and destruction as a central part of who he is (Aphophis conjunct the Sun)

So, to date, asteroids have shown us how he could well have ended up in this mess.Not everyone who had this chart would be where he is. However, anyone who had this chart would struggle with not making wreakage out of his life and the life of others. That is fair to say.Look how much we have seen and we have only just begun on my list of 300 asteroids.

I need to address two more asteroids in this article. Jeffrey may have the Child asteroid conjunct his Moon. We don’t know for sure because we do not have the correct birth time, but if he does, he will have a pure, kind of childlike attitude toward life. The Child asteroid seems to be a positive asteroid in terms of a childlike attitude of wonder and joy. However, it may also indicate immaturity and shallow thinking. I am not sure about this. To really understand all the nuances of asteroids takes a long time and many charts, as well as deep discussions with the people who have the aspects.

Now, our final asteroid is Counselor. This seems to refer to a lawyer, not a mental health counselor. He has it conjunct Saturn, exact. Saturn restricts and causes struggle in that which it touches. We can see that Jeffrey will have long and enduring relationships with lawyers—-something no one wants.

He has Boda conjunct the Sun. Boda is marriage. Jeffrey does have a sweet, warm, romantic and loyal side. This should not surprise people because human nature has many facets, most of them in warlike opposition to each other. *SIGH*