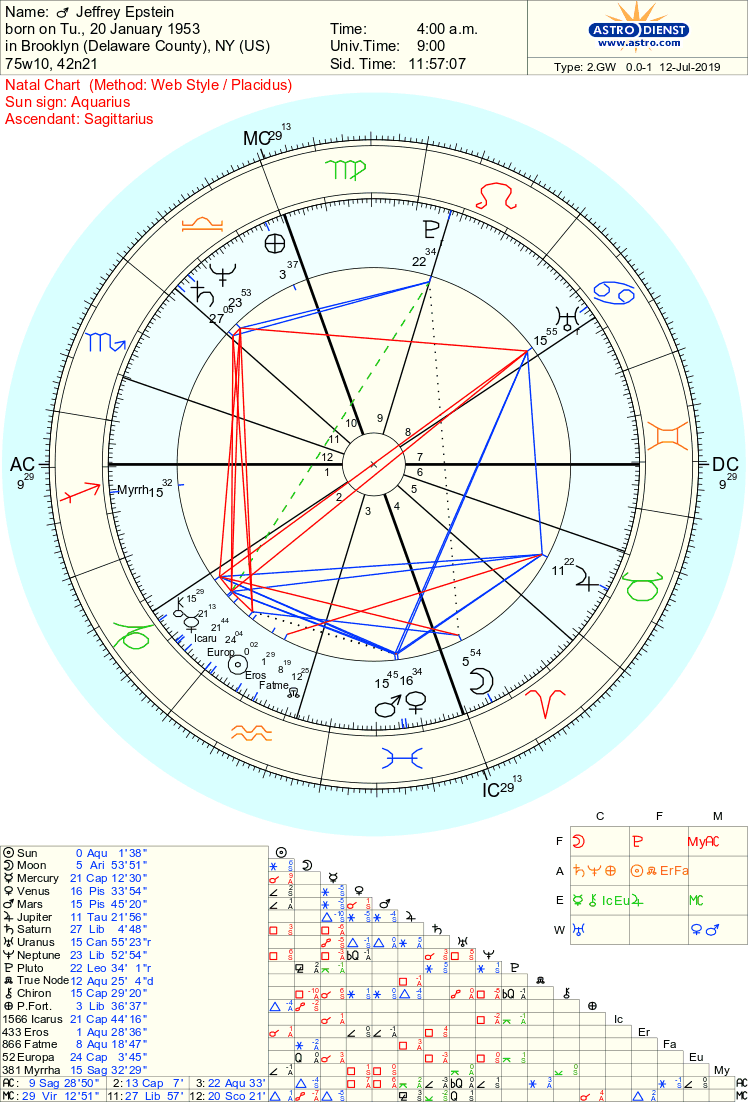 I am once again nonplussed particularly with the asteroid Icarus in exact conjunction to his Mercury. Most people know the story of Icarus. He was too rash. He made poorly thought out choices that led to very unfortunate consequences.In the myth,specifically, Icarus flew too close to the Sun and was destroyed.

Mercury is a very, very important planet.I read many biographies and autobiographies. If I read about a person who makes rash and poor choices, I run to the chart. I, particularly, look for Mercury and it’s aspects. Sure enough, we often have Mercury in hard aspect to Neptune, the planet of deception. Another factor for poor choices is Neptune in hard aspect or conjunction to Venus. These natives, often, make poor choices in love. They see the gorgeous guy and think he is the prince, but find out soon enough that he is, actually, the frog *SIGH*

Back to Mercury. Mercury is very important in ascertaining the level of the wisdom of the choices made by any native. I can’t think of a much worse asteroid to have conjunct Mercury than Icarus. Jeffrey Epstein jumped before he thought. I think we can say that.I really don’t think I have seen a worse asteroid profile ever. Perhaps, just perhaps, the Moon conjunct Dejanira, exact, could be worse. This native seems to have had really bad abuse which fractures her personality. Usually the abuse is sexual. She seems to become what is called in Psychology a Borderline Personality.

After studying Psychology for 6 years, I have little belief in it. I think most conditions are caused by spiritual forces. Childhood abuse opens the doors for dark forces to enter. Hence, the poor abused child did not do anything to find herself( or himself) in this condition. This is my opinion after many, many years of study of all forms of psychology, many religions, many “new age” teachings, kundalini yoga( which I do) and the Bible, of course.The Bible is the one way to God—–period end. I know many of my readers do not believe in Jesus, but I offer it to you in a setting that is rare to find it.

Back to the subject. Jeffrey has Eros conjunct the Sun at one degree. Jeffrey looks very sexy. Two people got mad at me when I said this. It is the truth. I deal in truth the best I can. A native with Eros in a prominent place will be sexy. A prominent place would be the Sun, the Ascendant or the MC. Take it up with God, not me.

Jeffrey has Dejanira conjunct the Sun. Hence, he feels like a victim in his life. He may “like” to be victimized. I don’t think anyone really likes it, per se. However, it becomes a “normal” state for people. I think his father was, likely, very abusive to him when he was a child.

To review some of the asteroids discussed in previous articles, Jeffrey has Pholus conjunct the Sun. Pholus explodes what it touches in an out of control way. Jeffrey has Aphophis conjunct the Sun. Apophis makes for chaos, often, leading to very bad endings, such as murders or rampages. If we put this all together, we have what we see as “Jeffrey Epstein” as we see him in the news. Most of the horror has not been revealed. The small amount that has been revealed is truly, truly revolting to the normal person. Once again, to the subject of dark forces. When one submits to dark forces, the end result is always disaster.

My mother molested me. I wrote a short story on it. It is called “My Panther Noire”. You can put it in the search engine if you want to read it. I have the asteroid Sado(sadism) in exact conjunction with the IC, the point showing the nature of childhood. I am a Jewish person who found Jesus through much humbling.Now, I try to tell others about Him. I love doing charts, but that is secondary to my true purpose in life, which is to serve Him.

Now, I will finish the asteroids.Jeffrey has Europa conjunct his Mercury at 3 degrees. Europa is glamor. It is that “it” quality. I imagine Jeffrey can talk a “very good game”. Mercury is communication.Also, Jeffrey has Venus in Pisces, which makes for a romantic silver tongue. I think Jeffrey can lure people with verbal charm is my point.

5 thoughts on “More Asteroids in the Natal Chart of Jeffrey Epstein( Eros, Europa,Icarus,)”