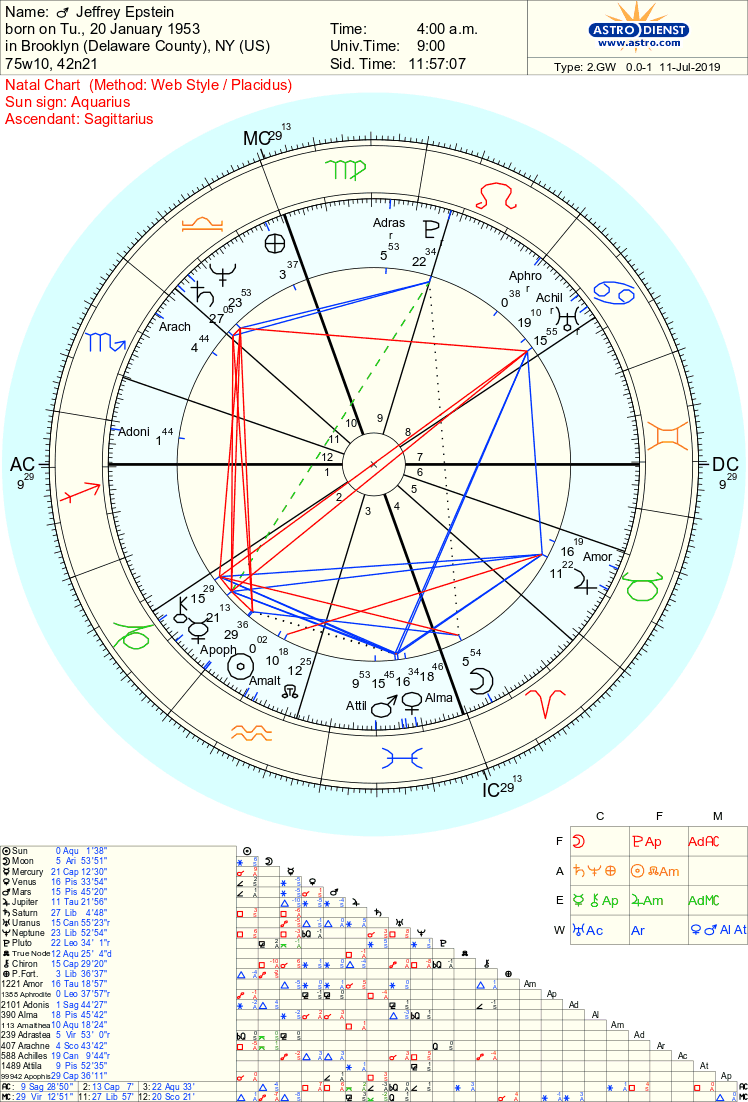 Oh My Lord—-Aphophis conjunct the Sun. Aphophis is chaos leading to destruction. This dude gets a “zero” when it comes to asteroids. He has Aphophis conjunct Dejanira, too. So, victimization leads to destruction. If that is not him to a tee, I don’t know what is! The problem with asteroids and charts is that you can only fit ten asteroids on each chart. So, one could miss the Dejanira conjunct Aphophis because Dejanira does not show up on this chart.

My faith in astrology gets stronger and stronger with each chart that I do. That brings me to God. God made the chart of each person. God is love. What we have to go through has a good reason, even if we cannot see it, which we usually cannot. This rambling has nothing to do with the chart of Jeffrey Epstein. Each person can choose his actions—-good chart, bad chart, any chart.

Jeffrey has Amalthea conjunct the North Node. This is a beautiful asteroid, showing warmth and tenderness. It is a person who could love a child that was not his own and embrace that child as though it were. Astrology shows us that all people have good and bad, so we have to be careful not to totally demonize even bad people.

I think there is a dark side and the side of God. Each person has many chances to choose. Jeffrey appears to be worship Satan. That is what the temple on Epstein Island is about. If he does not worship Satan, himself, he is involved with those who do. Once one gives themselves over to the dark side, terrible things can happen depending on how much one submits. I am glad I am Born Again and worship Jesus. I have made many mistakes. In fact, I think my life has been mostly mistakes, but I am forgiven.

Jeffrey has Alma conjunct Venus at 2 degrees. Alma is “soul” in Spanish. I think Jeffrey does have parts of him that are warm, tender and caring. I think he submitted to the dark side and ended up in a version of hell on earth. However, he does have a theme of tenderness with his Pisces Venus, Pisces Mars, Amalthea, Alma, Ceres(unconditional love) and Juno( devoted and loyal love).

Jeffrey has Adrastaeia in an exact quincunx to his Moon. Oh, I just remembered that the Moon could be 6 degrees in either direction, so we don’t know about this aspect. I will explain it anyway. It may be quincunx to his Moon and it may not. This asteroid shows someone who is stuck in an abusive situation and cannot get out, such as a child stuck in an abusive home. If he did have this asteroid quincunx the moon, then we could say that at times in his life he felt he was being abused and could not escape. We would not know if it were as a child or in an abusive marriage or what. If I did his entire chart and had the correct time of birth, I could answer this question, though.

I am getting a glimpse into the psyche of Jeffrey Epstein and it is fascinating to me. I hope you are getting something of value from these articles.

PS As I said, I need to do 30 or so separate charts to fit in 300 asteroids, so one can miss important things. I was thinking that Jeffrey has a terrible triad of Dejanira, Pholus and Aphophis conjunct the Sun. This is the worst thing I have seen, asteroid wise, in all my days. Well, Dejanira conjunct the Moon MAY be worse. Dejanira conjunct the Moon fractures the personality. The person kind of slinks off to live “under a rock” emotionally. In the case of Jeffrey’s configuration, I can see how his life became a living hell, as well as bringing a living hell to others. Very sad!

4 thoughts on “More Asteroids In the Natal Chart of Jeffrey Epstein( Includes Amalthea, Alma,Aphophis and Adrastaeia)”