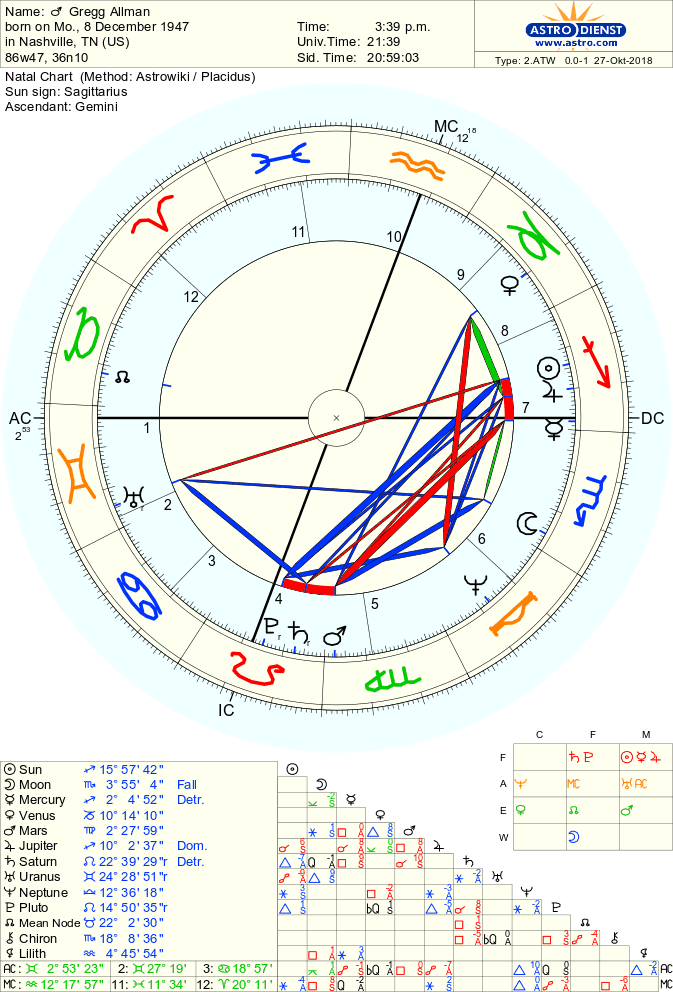 I just read the autobiography of Greg Allman. I never realized the power of autobiographies. One feels as if one has an intimate understanding of the author. I do not like biographies because they are that which OTHER people think of the person. Think of your own life and all of the interactions you have had. A biographer could take something very small and turn it into Mount Vesuvius. Hence, it is much better to get your information from the horse’s mouth.

Greg Allman is my fifth autobiography since I started delving into the world of the autobiography.The others are Gelsey Kirkland, Mia Farrow, Eric Clapton and Steven Tyler. Autobiographies take more mental energy from the reader than does a simple Stephen King novel,for example, but the rewards are well worth it. Also, as an astrologer, I can study the chart and see how the chart FRAMED the life of the person. With that introduction, let’s get onto our subject.

Some Insights Into the Natal Chart of Greg Allman

Several of the people listed above in my list of autobiographies had Venus in hard aspect to Neptune. With Mia Farrow, I think she has the opposition. When I read Mia Farrow’s book, as well as Greg Allmans’, I thought—–HOW do these people pick partners? Mia seemed to meet a person( in the case of Andre Previn), go on a three week trip, get pregnant and get married. Andre Previn was, probably, the best of her husbands. The others being Frank Sinatra and Woody Allen.

However, I cannot understand how someone would take the “sacrament” of marriage so lightly. I am not judging her. I do not have Venus in hard aspect to Neptune. I have an Unaspected Gemini Venus, so my Venus is in a very excellent position, through no effort of my own. I am sure I would do some things to which Mia would be aghast. That elucidates the point that the chart REVEALS the blind spots inherent in all people.

As pertaining to Greg Allman, the square is the hardest aspect of all the Venus/Neptune combinations.. The square can make us UNAWARE of things. When we are unaware, we can( and will) make mistakes. In the case of Venus/Neptune, the conjunction is an equally difficult aspect because the conjunction produces a blindness when it comes to love. If we are BLINDED to the intricacies of love, we will, likely, make some marked mistakes.

Greg was married at least five times. I got a little bored at the end of the book, so I may have missed a sixth marriage. When he married Cher, he seemed to do so with the amount of thought one would use if one decided to buy a new dress. He seemed to embody the adage—Marry in Haste, Repent in Leisure. I was surprised to see Jupiter in the seventh house, the house of marriage. However, Jupiter can mean multiple marriages, too. However, I think that if I studied the asteroids in this chart, I would see a difficult struggle with women. He may have the asteroid Medusa in a square. Medusa teases men and then punishes them for their attraction to her .*SIGH*
The Sun
Greg Allman has the Sun in the 7th House, also. This shows that he will desire to be married, which we do see.

Greg’s father was murdered when Greg was very young—-two years of age. It is a very sad story. His father returned home from serving in the military. He had just been promoted to captain. On his first night home, he went to a bar to celebrate. He met a drifter and offered the man a ride home. The drifter shot and killed Greg’s father. The chart shows the themes in our lives. It is quite amazing to think that when the baby takes his first breath, God has planned an outline of his life and that God gave us the science of Astrology with which to discover these things.

With respect to Greg, his Sun makes all positive aspects, showing that he thought highly of his dad, if only in his memory. I am sure if I studied the asteroids involving death, such as Graves and Apophis, I would see the deaths of both his father and later his beloved brother, Duane. Pluto in the 4th House does indicate violence impinging on the early home.Murder would be one of the worst kinds of violence.

Saturn in the 4th indicate a person who had to mature too early. Greg was sent away to military school at a very young age.His mother could not support the family after the father died. She studied to be a CPA while the brothers were gone. She brought them back home as soon as she had her schooling completed. I think Greg was the youngest pupil at the school. Greg was miserable at boarding school. He was very lonely. All his life, he hated being alone.

The Moon
One can see his very loving relationship with his mother, who was an unusual and unique person, in the best of ways. Greg has Moon trine Uranus, which can show us an “out of the box” mother. It shows us, as well, that Greg was a very independent person, in terms of his thinking and emotions. For Greg to write the heartfelt songs he did, it makes sense.

My last comment will be about his Water Singleton Moon in Scorpio. I find that when a person has a Singelton, he feels a great urge to EXPRESS both the planet, sign and element of the Singleton. In this case, Greg had a passionate desire to express his emotions. Music was his vehicle.

Here is some more information on how Venus in hard aspect to Neptune blinds the native to love.

Venus/Neptune–The Prince Turns Into the Frog