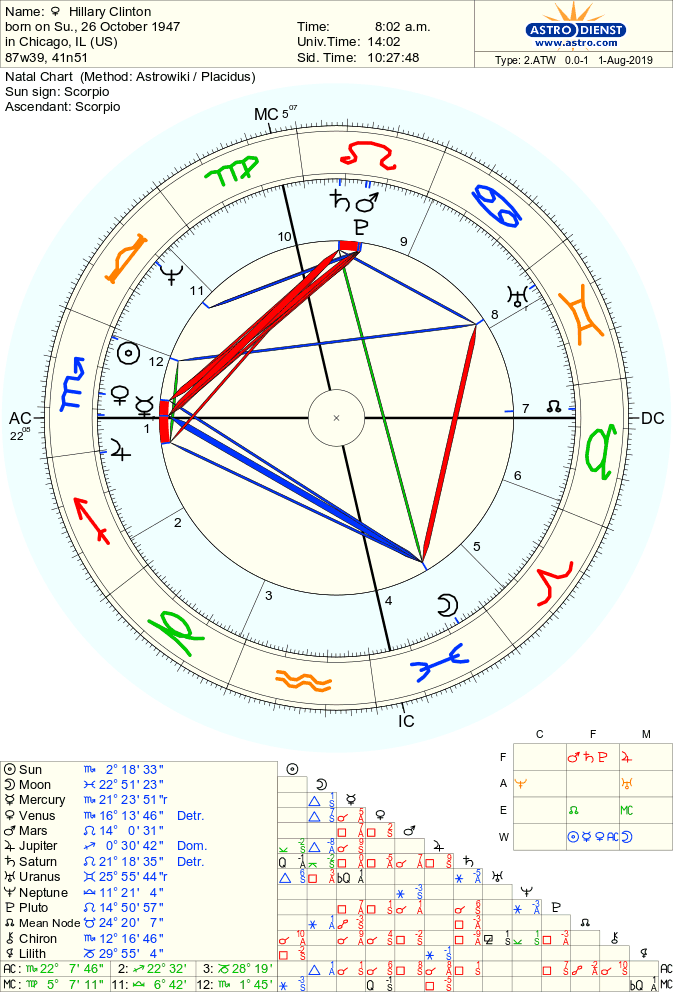 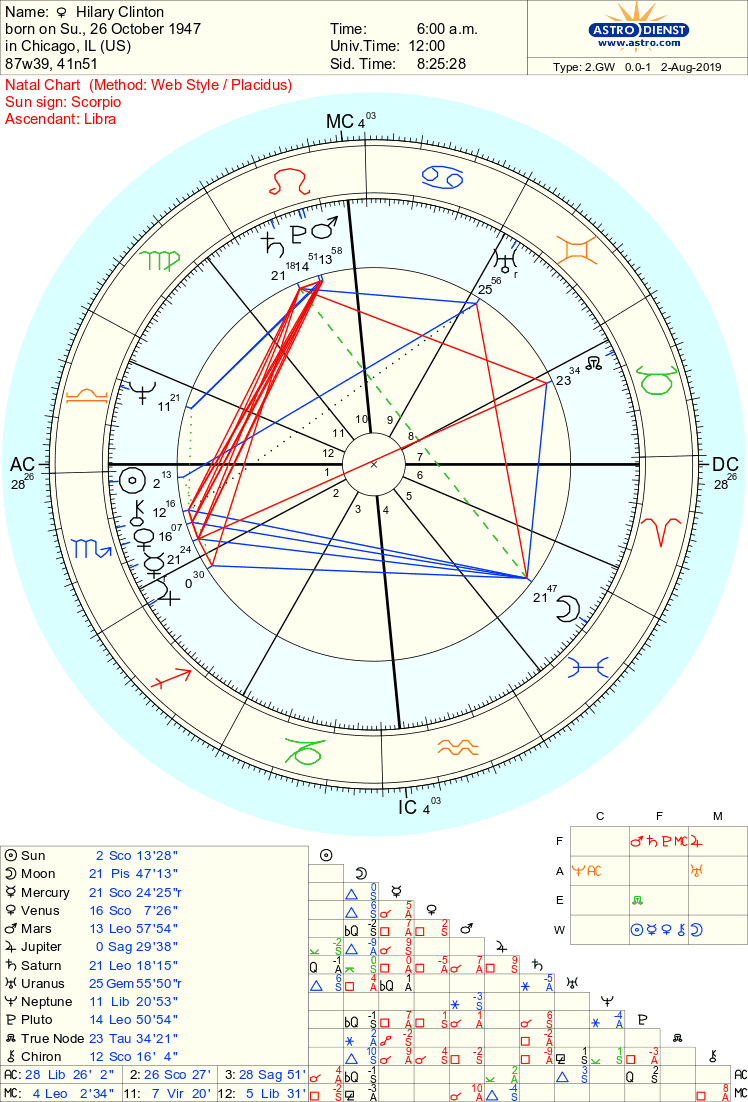 I find her vile. I find her so vile that I could not eat a meal and think of her. However, in the spirit of Christian charity *cough*, I will try to give an analysis that is as objective as possible. The first chart is the birth time that is commonly given. However, I have heard speculation that she gave us the wrong birth time. In the first chart, some things do not make sense. It would seem that she would need some recognition of her tenth house. So, I worked with her Ascendant to try to find one that made more sense. That is the second chart. We will use that as a reference in this article.

In my trying to approximate a birth time, I was thinking over her life. She has been a “leader” for her whole life. This bodes for a daytime birth. Day time births indicate more extroverted people. That is an interesting nugget to add to one’s astrological bag of tricks. Ask people if they were born in the day or at night and you have some basic understanding of them.

For Hilary, I think the second chart shows that her life of career was full and it was troubled. I think that a chart for Hilary which has no planets in the tenth house must have an incorrect birth time. So, let’s look at her tenth house for a bit. She has Mars in the tenth house, which makes perfect sense. Mars is the planet of drive. Clinton can be defined by pure and unadulterated drive. Secondly, we have Saturn, which is the planet of restriction. Hilary was, virtually, promised the presidency twice. Twice, it was thwarted. Thirdly, we have Pluto. Pluto creates great drama in the house in which it resides. *DUH*

Hilary is very high in water, having a Pisces Moon. However, her moon has several things happening which make it unlike a typical Pisces Moon. The typical Pisces Moon is gentle. It does not like to hurt others. I picture it releasing a fly rather than killing it. Clinton is anything but gentle. She is brutal.

Let’s discuss her Moon. The Pisces Moon person is very, very sensitive. They could be a poet or a writer of sentimental music. Paul McCartney has Pisces as his Ascendant. If you think of his love songs, you will get a sense of Pisces. Now, Hilary is the polar opposite of a loving person, but inside her is the uber sensitive soul. It just got damaged and thwarted until it became a monster.

Let’s look at the aspects to her moon. She has a square to Uranus. I don’t care what she says about her mother, her mother was not safe or stable. In turn, Hilary’s emotions are not in good order. Her mind races and she is tormened. The exact quimcunx with Saturn in the tenth makes perfect sense. Hilary is very self critical. Career is one place in which she has outer restrictions and these restrictions trigger her own painful emotions.

Her North Node is in the seventh house. In her day, a women needed to marry a man to rise in the world. So, Clinton, likely, set her hat to find a man who would rise in the world. She found him but got more than she bargained for. That would lead us to Uranus in the 8th house. I think Hilary and Bill have a very unusual sex life( and this is being nice)

Now, let us examine her huge first house stellium. As I said, the first house stellium is one of the worst places to have a stellium. The other is the seventh house. In the first house, the person is very self focused. Picture a naval gazer. They are staring at their own naval so intently that they do not see a nuclear bomb coming their way. In the seventh house, the native wants to get married so badly that they are blinded to many other important things.

Let’s look at the make up of her first house stellium. The Sun conjunct the Ascendant shows that she puts herself forward in life. Chiron in the first house tells us her pain will be seen by others. She has Mercury conjunct Venus, so she can talk sweetly.It is hard to see her as “sweet” but I suppose she takes a positive trait and makes it so exaggerated that it becomes negative.

One of the most outstanding things in her chart are the squares from the first house to the tenth. I think an accurate birth time for her would have to show something like this. Chiron and Venus square Pluto and Mars. These squares bring great “drama” into the houses in which they reside In this case, she has great drama in the area of career and this drama plays out such that it becomes the face she shows to the world.

I think of famous people who would have had a much better life if they were not famous, I imagine. I include Michael Jackson, Elvis and Princess Diana. If Hilary were not famous, she could have had an equally scandal ridden life, but it would not be played out upon the public screen. Maybe, Bill would have had cheated on her with her canasta club. Maybe, she would have embezzled money from her church offering plate. The fact that she was famous made her chart play out on the world scene. I and many others want to see her in jail or worse——–God willing.

This was a very cursory look at her chart. The natal chart takes me 4-5 days . I use all of the 300 asteroids, so you can see this is a cursory look but I think we can see a great deal and learn a great deal. I hope I have helped with that.

6 thoughts on “The Natal Chart of Hilary Clinton”