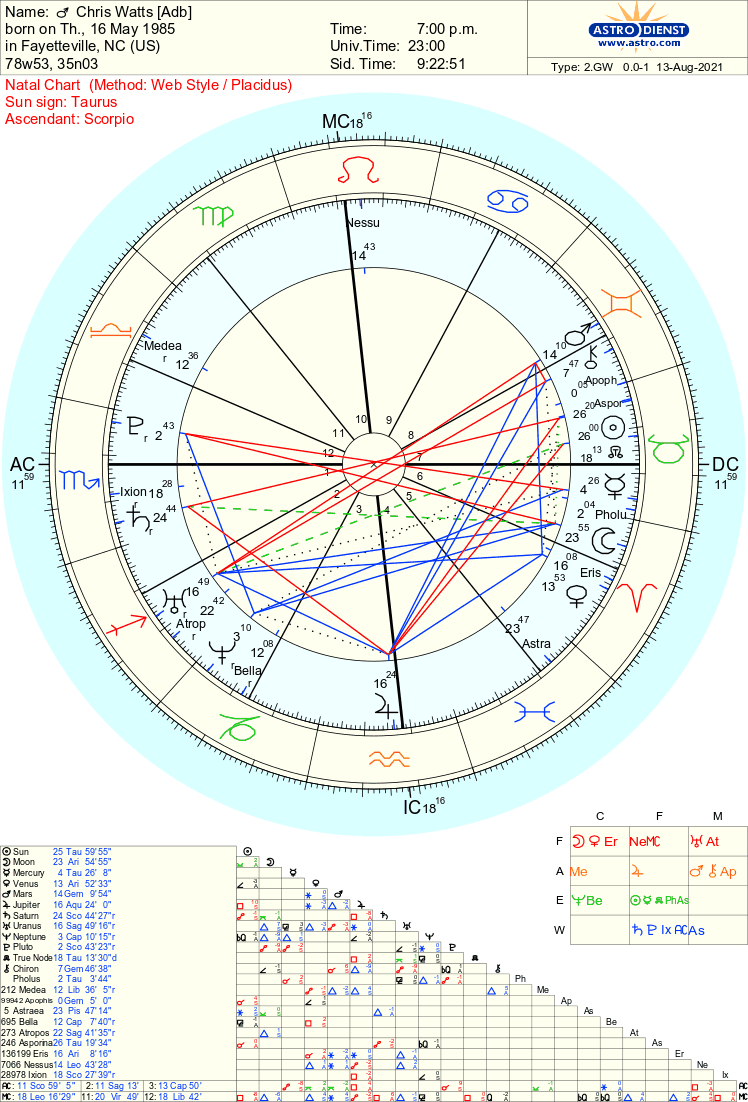 I am quite literally astounded by this chart. If one COULD say there was a chart which indicated someone was born evil, this would be a good contender. Do I believe people are ever evil with no chance of redemption? No, I think Jesus died for everyone but some people do not want Him. I think that with a chart like this, which is no fault of Chris’ own, he needed Jesus so very badly or his life was headed for the kind of destruction we have observed. Let’s see why.

People like to argue with me about Nessus, but here is a perfect example of why one should pay attention to Nessus, the asteroid of abuse. Chris has Nessus conjunct his MC. Other people see that any planet or asteroid which is one’s MC. In this case, Chris is known for being an abuser. In addition, he has another marker for abuse conjunct his Sun—- Algol, the Fixed star of evil. Not everyone with a prominent Algol is evil. However, when you put Nessus conjunct the MC and Algol together, one has a double header, so to speak.

Chris has an Aries Moon. Aries Moon is be one of the last Moons one would want in a chart like this. Aries Moon is selfish and impulsive. Aries Moon is also strong, being a cardinal sign. In addition, Chris has Pholus conjunct Mercury. Pholus explodes that which it touches. Mercury is the mind.Hence, Chris is very reactive, as seen in both his Moon and Mercury.

Chris has Venus conjunct Eris. Eris is an asteroid which causes one to be unsettled and agitated. It is an explosive asteroid too. With Eris conjunct Venus, Chris may be always searching for a new and “improved” love which would feel better than the last one. Prior to his marriage, I don’t think he had many long term relationships.

Now, we have another unsettling configuration. He has a Grand Cross with Nessus, the ASC, DSC, North Node and IC/Jupiter. This is frankly “mind blowing”. Nessus is the asteroid of abuse, as I said. The Nessus square Ascendant shows that he pushes down his abusive tendencies in his every day life. This would be the same for his marriage. He pushes down his abusive tendencies in his marriage. However, they are always there. Nessus is a strong force to repress. Jupiter oppose a “bad” asteroid makes if worse, not better. So, in his childhood, he was loved due to Jupiter being there but as he grew up, he had the Nessus waiting like a tumor to manifest on his MC, the angle that the world observes.

His North Node is conjunct his Descendant. I do not like this because his life purpose was marriage. His life purpose was a relationship. This is a difficult placement for the most stable of people because your happiness depends on others. As we all know, people disappoint us. With all the hidden abusive “passions”, shall we say, one does not want to be a super co-dependent. It is a brew that is poised to explode.

Another thing we do not want to see in a chart like this is Pluto in the 12th house. This is REPRESSION. This native is too nice. This native really cannot be assertive. Chris wrote a letter from prison saying that he could never say no to his wife. He maintained a life style he could not afford to please her. She liked extravagant parties and expensive things that they could not afford. They were in severe debt, according to him. Also, she ridiculed him for not being a “strong enough man who could stand up”. I understand that with what he did, it is hard to listen to anything he says. However, this was how he FELT. His chart shows that he was the type of guy who could not stand up. If we add that he was pushing down a strong abusive nature, we have a prescription for a bad outcome.

I think that his explosive nature(Aries Moon and Pholus conjunct Mercury) combined with abusive feelings repressed(Nessus in a Grand Cross with the angles), having to be “too nice”(Pluto in the 12th) a general selfishness and immaturity(Aries Moon) and wanting too much diversity in love( Venus conjunct Eris) and all mixed together to make someone who should have never, ever married or been a parent.

What is very sad is that any astrologer worth his or her salt could have told his wife, Shanann, to run a marathon if that is what it took to get away from Chris. Please, before you marry, get a chart reading.People criticize me for being a Christian and being an astrologer. I feel that God gave us this wonderful science to help us deal with the hardships of life. I believe this with every fiber in my body or I would never do another chart again!

19 thoughts on “Was Chris Watts Born Evil? A Look At His Natal Chart”