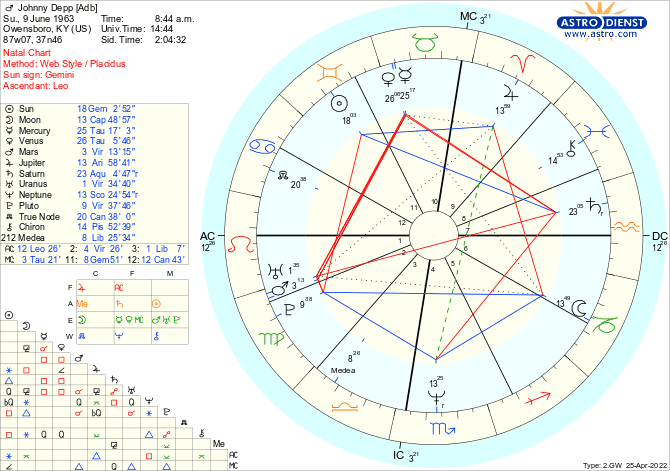 Don’t tell me you don’t think he is—Pleeeeze.
1.Venus in Taurus
This Venus is in its home. That allows it to have all the magnificence of a king on his throne garbed in glorious robes and radiant in his power and authority. Alright, I exaggerate a bit. However, any planet in its home struts its stuff. Any planet in his home is like the Big Man on Campus. He is gorgeous and knows it.When the planet is Venus, we have the traits of Venus, which are charm and beauty. Venus shows us how the native expresses love. In this case, Johnny does not love us, the people who do not know him. However, he has a loving nature which does translate to us.

2.Venus Conjunct Mercury
I LOVE this aspect. It is like candy, fudge maybe. Venus conjunct Mercury is an aspect which makes his words sweet. This native can charm anyone out of anything. When the conjunction is in Taurus, it takes the trait up many notches. If you like a guy who can charm you with his words, this guy is Superman.

3. Gemini Sun
Gemini Sun is a fun person. He is a light person. It feels good being around him. He lifts you up. He is very playful. He was a wonderful sense of humor. Sense of humor is very sexy. Also, most Gemini Suns are intelligent. Intelligence is sexy.

4. Moon in Capricorn
If a man is light and sexy,as is a Gemini Sun, and he has a cool, rational Moon, such as Capricorn, there is something very alluring about the DICHOTOMY. When people have sides of them that one peeks out, it makes the person very intriguing. It is like the concept of a black lace slip peeking out of a classic straight skirt being sexier than a nude frontal pose. Sorry for being so direct, but I am a Gemini Sun too.

5.Pluto Trine Moon
This aspect equals depth. This man who can go deep emotionally. Also, he likes women, in general. He understands women. There is not anything much sexier than that. His mother was abusive due to her own emotional wounds. However, they loved each other and were very close and bonded.

6. Dejanira Conjunt the North Node
This has an orb of 4 degrees which is a little too wide. I use 3 degrees. However, with the North Node, we should allow the possibility of a wider conjunction, perhaps. Only Johnny could tell us if he feels this conjunction, so we will theorize here. Dejanira and Nessus make a person sexy. They are dark asteroids. Dejanira is the victim. Nessus is the abuser. People deny that they are attracted to dark things. However, when I do an article on dark things, thousands of people read it. When I do it on light things, much fewer people are interested. You know in your heart I am right.

7.Mars Conjunct Uranus
This aspect may make him kinky *Sigh* However, how I view this aspect, more so, is as an accident prone person. He may take rash actions, such as JFK Jr flying a plane with a cast on his leg.

8. Mercury Conjunct Algol
One of my favorite website members, Teresa, told me about this aspect. “Here comes the dark”. Algol would fall under my theory that dark aspects make you sexy. Algol is the fixed star of evil. He does look a little bit like Norman Bates.

9. Neptune Sextile the Moon
This aspect gives a wonderful imagination, deep perception and emotional sensitivity. When a native has darkness next to sweetness and sensitivity, we chicks melt. Don’t hate me because I am beautiful.

10 Pluto Conjunct Mars
How could I have missed this? It is a bit wide but still counts. Many powerful men have/had this aspect. I am on the look out for this aspect in the chart of powerful men. Many of them were violent, at least the ones I studied. They include Steven Tyler, Kobe Bryant, Thomas Compano( high level political lawyer who killed his mistress) and now Johnny Depp. This aspect makes the native extremely sexy.

PS I will be back. As I watch this trial, there will be a lot to study. Please, share your opinions. I love you, my dear website readers!

33 thoughts on “Why Is Johnny Depp So Sexy?”