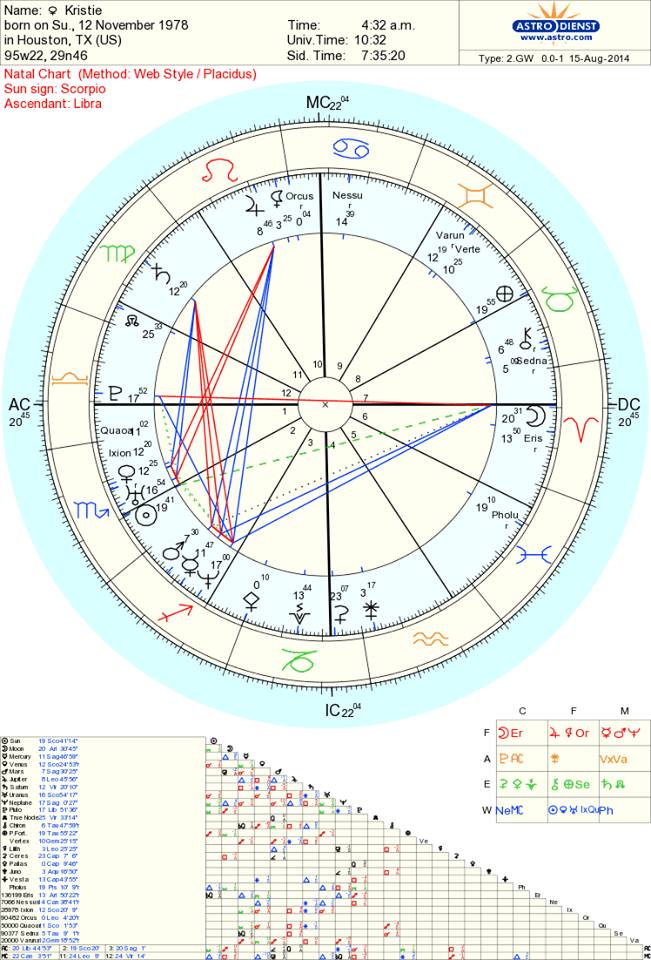 Kristie asked me a wonderful question. Please, keep your questions coming because it is my pleasure to try to answer them. First of all, everything in the chart is important. The planets from the Sun to Neptune, the angles(ASC, DSC, IC and MC) and  all the asteroids give voluminous   information on the native. The little graph on the bottom is it’s own powerhouse.

I have Kristie’s chart as an example. Across the top of the little graph on the bottom  is C, F and M. These are very important. They are called the quadriplicites. The Quadriplicities  tell us about the trait of leadership. They tell us about how much the native can stick to goals. They tell us how flexible or adaptable is the native. Hence, we have a powerhouse of information right there. I will explain. The C refers to Cardinal. Cardinal signs are natural leaders. A native high in cardinal planets will be a self starter. He will tend to be  independent from societal norms. He will have an air of authority. Think of a  policeman.

The F refers to Fixed Signs. These natives are resolute. They can form a goal and stick to it. Once they make up their minds, they will not change readily. The Fixed Signs will  tend to stay in a relationship the same way they will adhere to ideas. The Fixed Moon signs, in particular, Leo and Scorpio can be counted on to honor their commitments. This is my experience. If they are in a relationship, they will not readily cheat. However, for the purposes of this discussion, think in terms of being resolute with goals, ideas and commitments and you will have an understanding of the Fixed Signs.

The M refers to Mutable. These natives are more flexible and easy going. Picture a traveling companion. The Cardinal native will want to be in charge. He will plan the tour. He will arrange the hotel bookings. He will plan the restaurants. He will sitting at the head of the group with the travel guide.  The Fixed native will follow the Cardinal  native’s lead. However, if he does not like a restaurant, he will refuse to go. If Chinese is planned and he has a mindset for Italian, no one will stop him. That is the nature of Fixed. Mutable will be the easiest traveling companion. He goes with the flow. Think of Cheech and Chong–Whateeever.

That is the Quadriplicites. Now, we will go onto the Elements. These are the letters on the vertical side of the graph—F, A,E,W.  The Elements are of crucial importance.I am not saying that I honor them more than others but I look, right away, at the elements for Voids and preponderance. Voids dominate any chart. I am an earth void. I am very different than many women. I did not want a big wedding with all the trimmings because that meant  too many details. I wanted to get married with a few witnesses and be done with it. I have mismatched dishes. I have some from twenty years ago. I have some I picked up at Wal mart. I have some I ordered from Amazon. Nothing matches. I have a pan with a broken handle which I use every morning to boil water for coffee. I did not notice it was broken until someone came over and asked me why I don’t get new pans.

I had a tag on the sofa that was left for months until someone cut it off lol. That is an earth void. I have an earth void garden, too. The man who helps me with the garden is high in earth. He cannot stand that I don’t have vegetables planted in  neat rows and that the same things are not growing in patches. He made a potato patch, a basil patch and a garlic patch. He lined up the rows neatly. That is a native who is high in earth. His girlfriend, who is high in earth, lines up her clothes by color. My clothes are thrown in the closet and I pay something will be clean and unwrinkled when I have to go out.

I will explain each Void a bit. I will explain what it is  like to be high in the elements, too. Then, we can put this together with the Quadriplicites and have wonderful insight into the native.  I have explained the Earth Void. Let’s go onto the Air Void. This is the second easiest Void, in my opinion. The Earth Void is the easiest. However, the Air Void simmers inside with the sheer frustration of not being able to express itself. Hence, the Air Void may react to insults with a kind of obsessive, circuitous kind of   thinking until it explodes in frustration. Air Voids seem to take things very, very personally because it is not easy for them to detach from outside circumstances such as insults or other kinds of personal assualts. Conversely, those natives high in air can do this  rather easily.

The Water Void is the hardest. What is funny, to me  is that if I have people who have an instant dislike to me, it will usually be Water Voids. I have Cancer Moon conjunct the MC, so I have a profound sense of water about emanating from me out to the world. That which touches the MC is seen by the world.However, onto the Water Void. I find that the Water Voids deny the essential nature of the Water Void, often. The Water Void does not have empathy in the way that Non Water Voids do. I am sure they have a form of empathy. I am not saying that they don’t. However, a Water Void would not be a warm fuzzy as a Cancer Moon. A Water Void would be more likely to tell you to stop crying, grow up and put on your big girl pants. One cannot control one’s chart. However, one would be advised to face it and learn from it, something that can be rather rare, with some people.

Lets go onto a preponderance of the Elements. Those high in earth are very organized. They pay attention to details. They checkbooks are balanced. Their desk is organized. Those high in Air are logical. They can fight the good fight because they can pull back and detach. I am high in Air. Be careful if you try to win a debate with a person high in Air. It is not easy. Those high in Fire have  a natural self confidence. They strut their stuff. Think of the proud lion and you will have  a picture of the native who is high in fire. The native who is high in water is very sensitive. If he is very high in water, he may be too sensitive for this world as in a Peaches Geldof.

Let’s look at Kristie’s chart and see how we can put this all together. Kristie has an interesting Profile. She does not have a Void but is low in Air and Earth. I have a category of an Almost Void that I made up myself. People who are very low in an element have traits of the Void but not to the extent of the full Void. Hence, Kristie will tend to be rather disorganized. She may tend to let thoughts simmer and build in intensity until they explode, too.

Kristie is highest in Fire and then water. Hence, Kristie has a natural self confidence. She is blessed in this way. With a preponderance of water, she will have a great deal of empathy. So, putting this together, Kristie may not be very organized. She may let thoughts build up until they explode but she will have  a natural empathy and a  natural confidence.

Onto the Quadriplicities. Kristie is very balanced between being a leader, resolute and flexible.

I hope you liked this article and that you learned something of value. Please, leave your Comments in my Comment section.