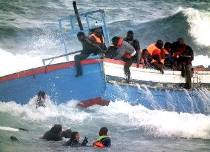 “Four months ago I made my decision. I wanted to believe in Jesus. I wanted Him to be my Savior. Truly He has answered many of my prayers. Life is still difficult but I’m thankful. I have an inner peace. I am a new person. It seems God allowed me to be diverted to Greece so I could hear about the Christian faith and believe!”

(Athens, Greece)—An Afghan woman, who was recently in Athens, Greece, shared her amazing story at a meeting I attended, and I now share it with you below, and ask you to pray for her as she begins her new life: (Photo via ANS)

I was crammed into a small boat with 65 other Afghanis. We were headed to Italy from Turkey accompanied by our smugglers. A storm approached with high winds and rain, which then descended on us mercilessly causing our boat to rock violently. The waves were intent on capsizing our vessel.

We hadn’t eaten or drunk water for three days. Women and children were crying and getting sick. Many had come close to losing consciousness. I was separated from my children who were in another part of the boat and I couldn’t get to them.

People began praying different surahs from the Quran and repeating the creed over and over. The shouts of “We’re going to die! We’re going to die!” were interspersed with the prayers of the refugees. I, too, said a few of those prayers in my utter desperation. I felt sure that we were going to drown. We were in a hold on the boat that had a few windows. The air was pungent with body odor, humidity and a sense of terror. If we opened the windows water poured in, but keeping them shut made it difficult to breathe.

Suddenly our boat took a sharp nosedive. Everything and everyone was sliding in one direction. This was it. We were going down! Just then flashes of conversations I had had with my Christian sister in Australia and my Christian brother in Germany, and scenes from a film about Jesus I had seen in Iran came to my mind.

I breathed out a prayer to Jesus. I had never prayed to Him before. I told Him that if He allowed me and my children to live I would go to a church as soon as we reached land. Immediately the boat righted itself in a miraculous way and the storm eased. People rejoiced that God had heard their prayers, but I knew Jesus had answered my prayer!

Incredibly at that time, a large Greek boat drew alongside us and threw a few bottles of water into our boat. Fights broke out with people clawing to get one to assuage their thirst. Then men from the big boat lashed our boat to theirs and brought us safely to shore. They must have called ahead because on the beach where we landed there were rows and rows of water bottles and cups waiting for us!

We were then taken to a camp area where we were given food, shelter, and dry clothes. If those Greeks had been Muslims they never would have saved us. And there is no way they would have supplied us with water, food, and clothing.

Though we were headed to Italy, we ended up in Greece. Fulfilling my promise to God, the first thing I did was to ask for a church. I then headed straight for it. It was a Greek church. A wedding was taking place. I went in and sat and watched! Nobody said anything to me but it was interesting to see the church building.

The next week, I went to another church and just sat in the back and watched. I didn’t understand anything they were saying. I went to a third church and again, I did not comprehend what was being said, but strangely I had a peace come upon my heart in just being in those churches. I realized something was happening inside me. I didn’t understand it but I knew it was something good.

Then I heard about a place where an organization that operated in an 8-story building. I heard they were providing food for Afghans so I went there. It was the Hellenic Ministries Refugee Center. I heard a talk about Jesus translated into my own language. They gave me an Afghan Bible. I took it and began to read it. (Photo via ANS)

I compared what I read in the Bible to what I knew my religion taught. The Bible said things like, “love your neighbor, turn your cheek when struck to give the other side, forgive your enemies.” My religion urged us to kill the infidel and hate our enemies. I had never read anywhere of love and forgiveness like in the Bible. Enemies in Afghanistan had killed my husband. All I ever heard from the two major sects in my religion was that each other were infidels.

I witnessed a man get shot in the chest and die because he was from the other sect. Another woman was shot and died right in front of me because of her particular sect. I saw men whose limbs were blown off bleeding profusely in bomb blasts over sectarian clashes. I could not get these images out of my mind. I was only 15 years old then and those images kept coming back to me, sometimes two or three times a day.

I could not help but notice the difference in the people who were working in Refugee Center where I would go to listen to the Bible lessons. They were humble and always ready to help without ulterior motives. I liked them. I was beginning to accept their teaching. I appreciated their attitude and manner. I felt myself drawn to the Jesus they proclaimed.

Then 4 months ago I made my decision. I wanted to believe in Jesus. I wanted Him to be my Savior. Truly He has answered many of my prayers. Life is still difficult but I’m thankful. I have an inner peace. I am a new person. It seems God allowed me to be diverted to Greece so I could hear about the Christian faith and believe